The past few rain showers have really made our produce (and our cover crops) JUMP!!! I’ll have kale, collards, arugula, and possibly a few bunches of radishes available at Renfrow Hardware on Wednesday and Saturday this week. Coming next week – swiss chard, mustard greens, and several herbs!

The cat’s out of the bag, and I’m so excited to let y’all in on something that we’ve been keeping pretty quiet for over a year – we are going to be part of the annual Gardeners’ Garden Tour  this Mother’s Day weekend, May 7 & 8, hosted by the wonderful Myers Park treasure, Wing Haven Gardens.

We will have several bluegrass bands rotating through the farm all weekend, and invite tour participants to pack a picnic and enjoy a leisurely lunch under our pecan trees. Last year’s tour attracted approximately 600 folks, and we hope that some of y’all will join us for this fun family event!

We will be kicking into high gear for the next month to get the farm in pristine condition and tour-ready, eek! 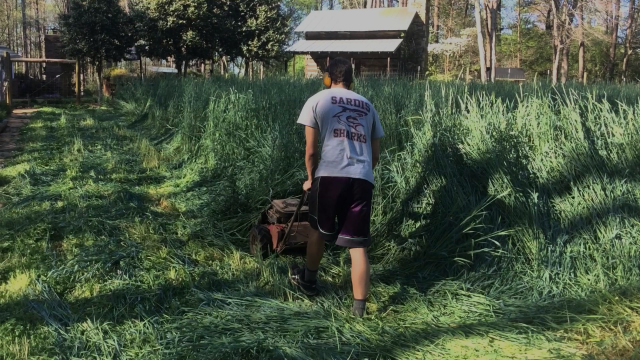 Philip, Ruth’s son, spent one afternoon of his Easter break mowing down this tall patch of rye grain with a sickle-mower and leaving it in the field to act as a mulch for this growing season. We will plant hundreds of tomato plants directly through this mulch throughout the next six weeks. 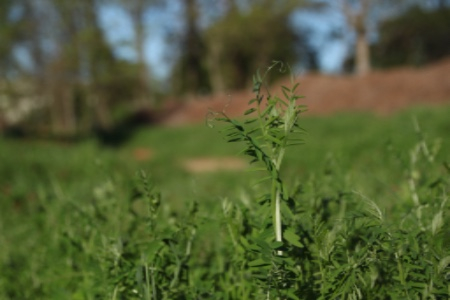 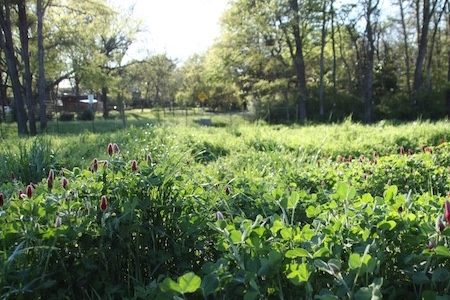 Some of the other cover crops that we grow on the farm are hairy vetch (photo #1) and crimson clover (photo #2). I learned from a chef this past week that both of these cover crops are edible! Unique nourishment aside, these crops are workhorses for transferring atmospheric nitrogen into the soil, allowing for lessened fertilizer needs for the crop that follows them in this field. 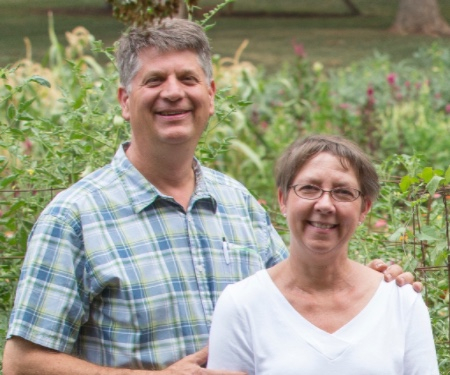 David and Mary Beth Blackley have been at Renfrow’s since 1984 and 1987 respectively. They have raised three daughters, Pressly (25), Charlotte (23) and Martha (20) there.

David bought Renfrow Hardware upon graduating from NC State with a degree in Mechanical Engineering, an education he draws from every day in business. His lifelong passion for gardening is being met through the development of Renfrow Farms. He also enjoys woodworking and blacksmithing as hobbies. He remains involved in Boy Scouts despite having only daughters and both he and MB are very committed to their church community.

Mary Beth became an employee of Renfrow’s by marrying David and began to learn gardening right away. She prefers to garden on a smaller scale with her raised beds, but is always available to harvest produce at the farm and help out at the market stand. A graduate of Furman University, her lifelong passion has been creating art in various forms, many of which she uses to promote the store and farm in graphic design, illustration and oil painting.

We will continue to have at least four more introductions in the coming weeks of Renfrow Family folks.  Pressly, Ruth, Gaspar & Sid were introduced in the past few weeks and they’re on our website in our four most recent newsletters. 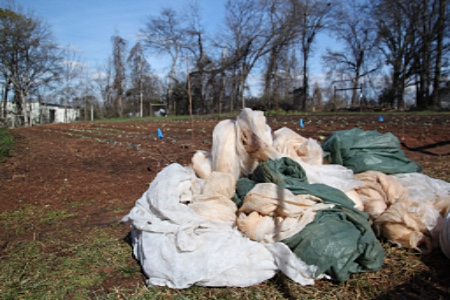 We hoped that we might be frost-free till October, but this weekend’s forecast isn’t looking promising…be sure to cover any of your warm-weather crops on Tuesday night and Saturday night to protect from potential frost, we will be doing the same!

This error message is only visible to WordPress admins

Please go to the Instagram Feed settings page to create a feed.